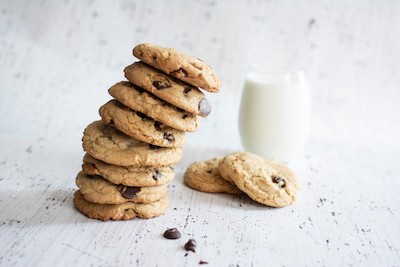 I was talking about the process of willpower and building healthy habits In a recent call with a client.

He was telling me how sweets are one of his biggest struggles.

He told me a great story.

He was out with his family and his daughter-in-law was eating some cookies. She took a couple of bites of a cookie and then just left it there.

The concept was mind boggling to him. The fact that she left just half of a cookie sitting there… What was happening?!?

He knows she’s not a sweets addict like him. This makes it much easier for her to put them down and walk away, but it still impressed him.

He felt he didn’t have the willpower to do that.

But then he realized something very powerful. She didn’t put down the cookie because of strong willpower or as an act of saying no to a craving.

It didn’t matter to her whether she ate it or not. She put it down because she was indifferent to it.

He thought about how great it would be to get to that point himself!

To not only be able to say no to sweets, but to get to a point where it literally didn’t matter one way or the other if he had them.

I said this is a great example of the progression of something becoming our “lifestyle”.

Willpower is necessary when we’re changing our habits and overcoming temptation, but eventually it’s not about willpower. Eventually it can just be our lifestyle, our normal pattern of behaviour.

Lifestyle is a nice term that everyone likes to use, but how do we develop it and what does that really mean?

It means that eventually we get to a point where doing the healthy thing is not about saying no, it’s not about using our willpower to stop us from our cravings, and it’s not about denying ourselves a pleasure in some way.

It’s about making a decision one way or the other without stress or concern.

It choice becomes simple and easy.

That is when something becomes lifestyle.

But as always, getting to this point takes time.

We CAN get there, through practice, repetition, and yes, building our willpower. We will use our willpower to fight the cravings and overcome immediate comfort until we get strong enough to not even need it.

At first, you will fight hard. You will try and say no to the temptations but mostly you will be unsuccessful.

Slowly you will start to get stronger. Eventually you WILL be successful!

You will get more successful more often, but still with a fight against the temptations.

But with more and more success the fight will get easier and easier.

Eventually you will get to the point where there is no fight. There is no success or failure

There is just a decision.

A decision that aligns with a higher purpose.

It’s at that point you just put down the cookie, indifferent to it, and get on with your day.