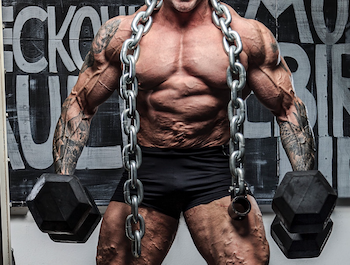 Not wanting to “get too big” is a common comment when people start train. I often hear thing like I don’t want to…

When it comes to fitness goals, people want to end up with the “perfect” body they see on Instagram or in magazines without going TOO far.

I get it, of course you want your goal and NOT something else, but this creates a problem.

By thinking about what you don’t want, or having the fear of going too far along the path of your goal, you end up not going far enough.

It’s like running the 100m sprint and needing to stop EXACTLY ON the finish line because you don’t want to run 110 meters.

What you actually want is to not go PAST your goal.

But thinking this way actually PREVENTS you from reaching your goal in the first place!

Because it’s a negative thought and it goes against your goals, it’s slowing you down before you ever get even close to the finish.

It’s like driving around with the brakes on and then getting frustrated that it’s taking so long to get to where you want to go.

My response to anyone with this mindset is: DO IT!

Get too skinny. Get too big. Put on too much muscle or lose too much weight.

DO the thing you say you don’t want.

Getting too many results is way harder than you think. It’s very unlikely to happen, because you’ll be able to see your desired results as you’re going by.

Because you’re just talking about going past your goal, it’s pretty easy to go back. You can easily do the things you are doing RIGHT NOW to bring yourself back to a place of less whatever you achieved.

If you got too skinny, eat something.

If you got too big, ease off on the gym for a bit.

It’s easier to get back to where you want than to get too much of what you don’t want in the first place.

Show me you actually CAN get too much and stop using it as an excuse to not even start in the first place.